Mata Hari and “The Art of the Tease”

I don’t remember when or where I first heard the name, of exotic dancer, Mata Hari and her unusual true-life story who was convicted of being a double spy during World War I, then executed by firing squad in France, but somehow it feels like I’ve known her my entire life.

In 2017, a hundred years after Mata Hari’s execution the secret files of her case became public. The Netherlands dedicated this year to her memory. I had a chance to visit the exhibition and performances about Mata Hari’s life and this inspired me to write this blog about her. 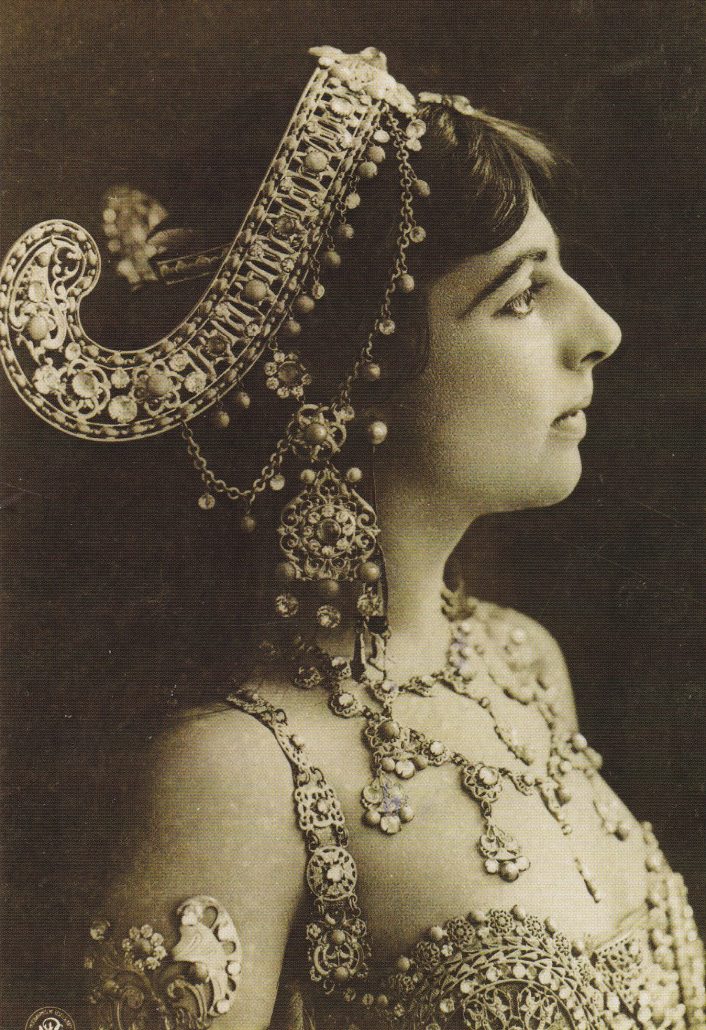 Mata Hari in Malaysian language means ‘eye of the day’ – the sun. It was the stage name of Dutch performer Margaretha Geertruida Zelle from Leeuwarden, her life had many unpredictable, dramatic and even ironic turns. Let’s follow Margaretha’s life path from her hometown Leeuwarden to all away to Paris where she transformed herself into iconic, Mata Hari.

Margaretha was born on 7 August 1876 in Leeuwarden, she had a happy carefree childhood surrounded by loving family and received a good education. However, at age thirteen she faced her first life problems: bankruptcy of her father, her family falling apart, her mother’s death and problems at school.

At age eighteen, Margaretha decided to reinvent her life and find a future husband who can financially support her. Note: it was a time when woman were dependent on men and Feminism was something that they only could dream about. Margaretha replied to the advertising in Dutch newspaper placed by Dutch Colonial Army Captain Rudolf MacLeod, who was looking for a future wife. One week after first meeting, they got engaged and five months later they got married, during this marriage family grew by two children Norman-John MacLeod (30 January 1897 – 27 June 1899) and Louise Jeanne MacLeod (2 May 1898 – 10 August 1919). 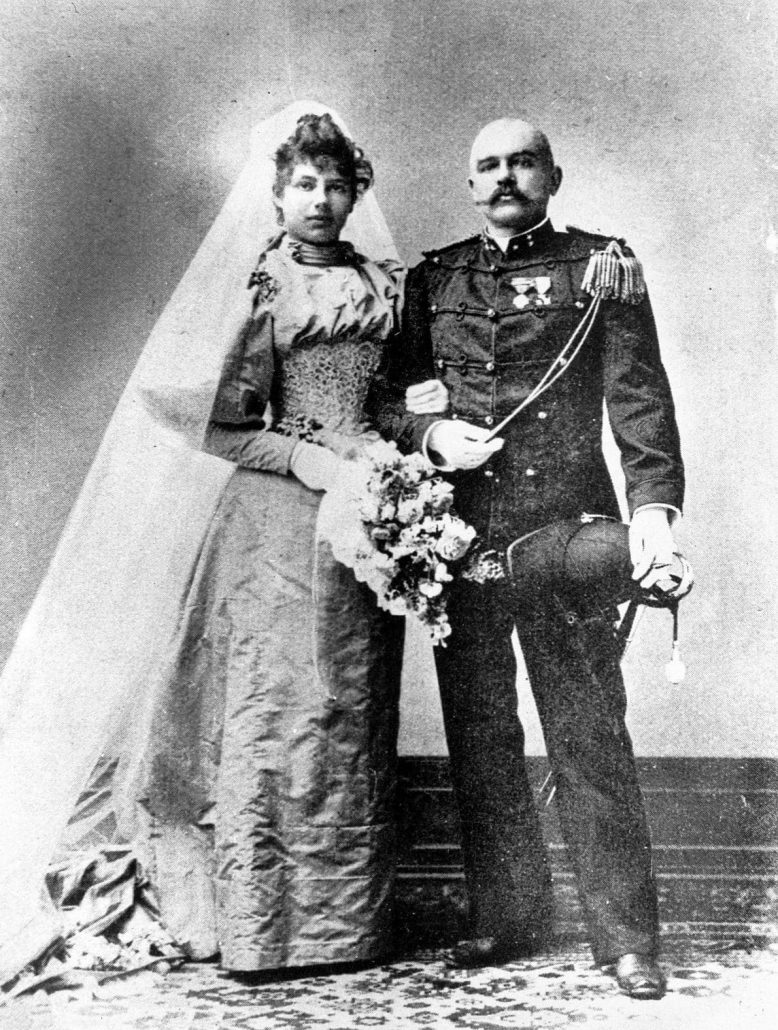 In May 1897, the couple moved to Java, former The Dutch East Indies (a Dutch colony consisting of what is now Indonesia). In Java Margaretha studied traditional dance styles and the culture of the island and enjoyed a local dance company. Soon after the marriage Margaretha’s husband turned in a monster, he drank, bit her, openly had affairs with other women and in every way tried to break her strong personality.

After their children became seriously ill, probably as a result of treatment from syphilis that McLeod gave to Margaretha, who transmitted it to the children during pregnancy. Note: In 1900 syphilis was treated with mercury and her son didn’t survive. This unhappy marriage didn’t last long and soon after returning to The Netherlands, they split. After the divorce McLeod refused to pay alimony and didn’t allow Margaretha to see her daughter, she was desperate and completely broken. Margaretha tried different jobs here and there, but her financial situation was very critical. She didn’t had another choose than to go to Paris, this wat all divorce woman did in that time. This decision wrote the history.

It’s really unbelievable that despite all difficulties Margaretha could put herself together and transform into the Mata Hari character. It was magical transformation from a caterpillar to a butterfly. I truly admire her power of will and strong personality! 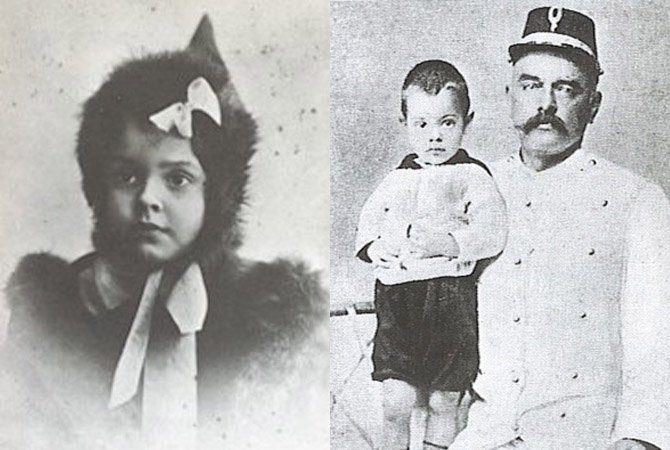 Although most people associate Mata Hari as a double agent and dancer spy, it is my belief that Mata Hari first must be remembered as a founder in Europe of “the Art of the Tease ” by turning exotic dance with undressing elements into an Art Form, and presenting her acts in the most famous stages of her time. Ten years in a row Mata Hari’s shows were sold out and newspapers couldn’t stop describing her talent.

“So feline, extremely feminine, majestically tragic, the thousand curves and movements of her body trembling in a thousand rhythms.”
-Paris newspaper

How could Mata Hari present such provocative and scandalous dance choreography in that era? Let’s think about it together.

“Slender and tall with the flexible grace of a wild animal, and with blue-black hair.”
-Vienna’s journalist

Paris was the Fashion Capital of Europe and oriental style was a big trend when Mata Hari became famous with her exotic dance. 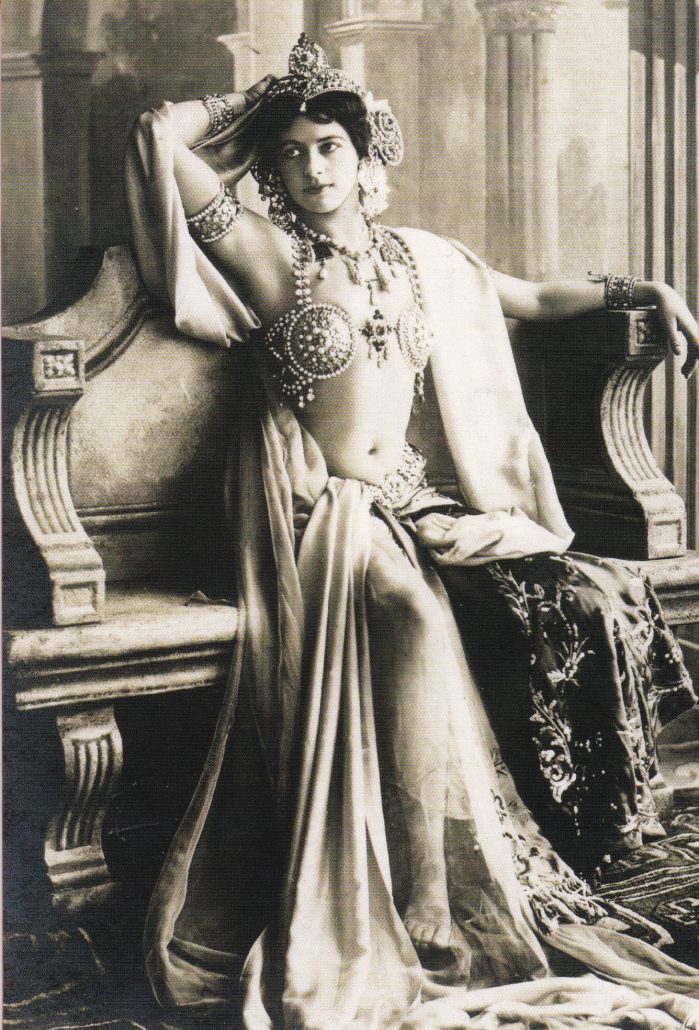 Mata Hari translated her undressing performance as a sacral dance from Far East and represented herself as a Javanese Princess of priestly Hindu birth, pretending to be immersed in the art of the sacred Indian dance since childhood.

“My dance is a secret poem in which each movement is a word and every word is underlined by music. The temple in which I dance can be vague or faithfully reproduced as it is tonight, for I am the temple.”
-Mata Hari

With the knowledge that she received in Java and the right contacts in Paris, Mata Hari created a fantasy persona known to the world as, Mata Hari and played that character during all her career. 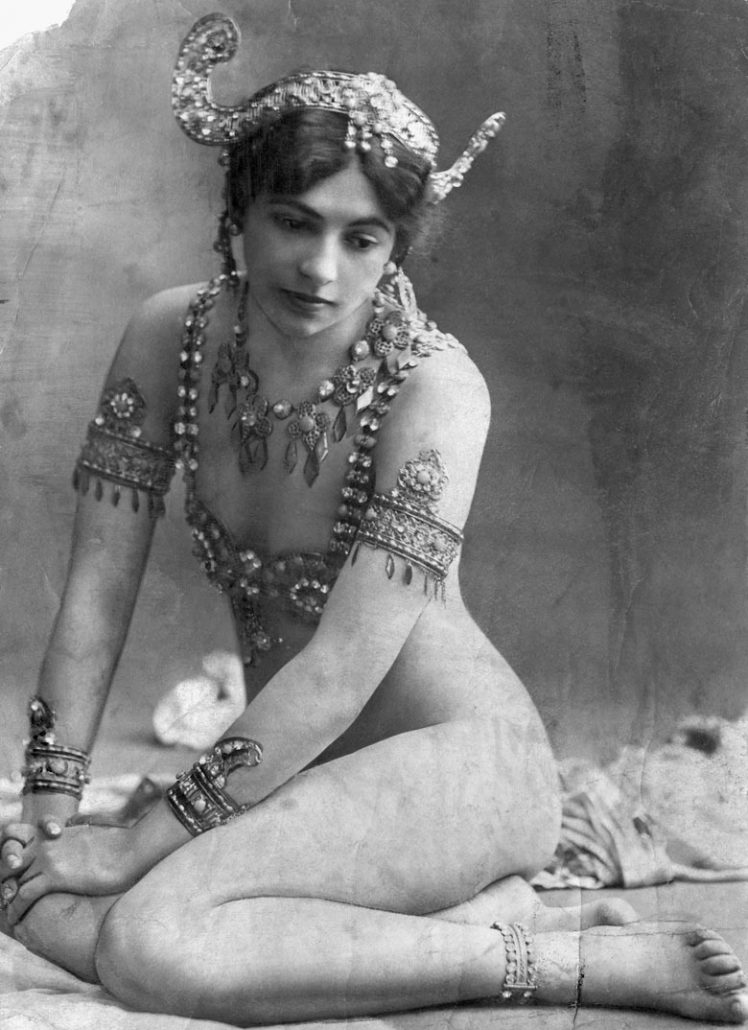 Mata Hari’s acts were inspired by Java’s culture and she gave them educational meaning. Her performance existed of three parts, during each part she sensually removed a layer of her clothes and ended the performance with having on only bra and jewels, this what audience was thinking. In reality, she always wore flesh-coloured body stocking underneath. During her dance she offered herself to the god Shiva, and her dance routine was interpreted as an educational art form, as temple dance, but of course people came to see her lovely naked body.

In 1905, the year when she made her tribute, Mata Hari performed in over thirty theaters and salons in Paris. She was one of the highest paid dancers in Europe and became a style icon, her pictures were ubiquitous: in magazines, newspapers, cigarette boxes etc.

Unfortunately there is no known documented footage of her performance only photography and memories of the audience that describe her grace. We know that she was tall, charming, stylish, well-educated with a strong charisma. I believe that Mata Hari was correct in marketing herself as a brand, in the right place, at the right time.

“Death is nothing, nor life either, for that matter. To die, to sleep, to pass into nothingness, what does it matter? Everything is an illusion.”
-Mata Hari

If you wish to learn more about life of Mata Hari I advise you to watch a dramatized documentary “Mata Hari the Naked Spy” by filmmakers Machiel Amorison and Susan Wolf. This documentary unravels the complex story of Mata Hari and most intimate details of her life.

If you enjoyed this post, I’d be very grateful if you’d help it spread by emailing it to a friend, or sharing it on social media. Thank you!