A Brief History of Burlesque and its Origins 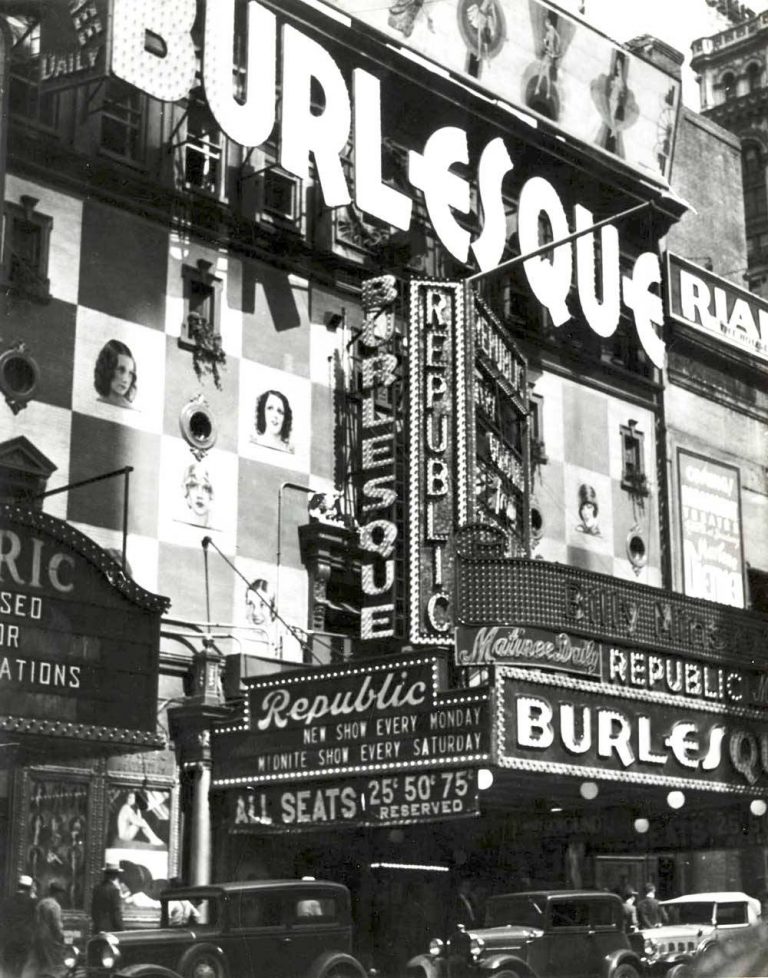 I’ve been in the burlesque industry for 13 years, in these years I’ve attended many burlesque conventions and met legends of burlesque like Tempest Storm ‘Queen of Exotic Dancers’ and even took masterclasses from April March ‘The First Lady of Burlesque’, Marinka ‘Queen of the Amazons’ and Joan Arline ‘The Sexquire Girl’.

These burlesque legends shared with me burlesque memories and stories from the 1940s to 1970s. And so, inspired by their tales of the history of burlesque I decided to do some more research. I wanted to uncover the origins of my favourite art form because during the 1990s when burlesque experienced a resurgence and after the release of the Christina Aguilera film Burlesque in 2010, there was a lot of confusion around the genre. Each community had its own interpretation of burlesque, because there was no clear definition for this entertainment artform.

The Origin of the Word Burlesque 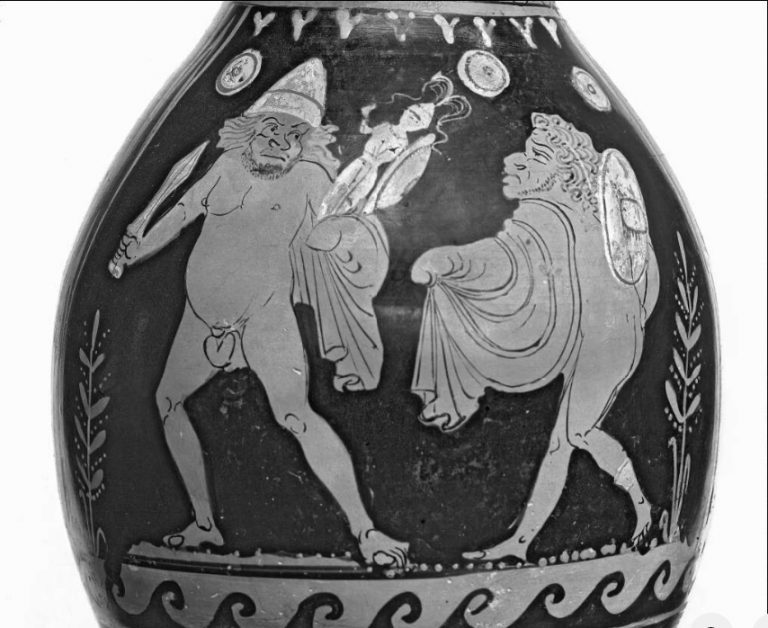 Scene from a burlesque of the seizure of the Palladion.
Source: http://www.britishmuseum.org/research/collection_online/collection_object_details.aspx?objectId=463380&partId=1&searchText=1884,0409.9&page=1

Many aspects of burlesque were present in the comedies of ancient Greece and were later adapted by Roman playwrights for the stage, creating their own kind of satire and parody.

The word burlesque appears in European literature in satirical works at the beginning of the 14th century. In the early 18th century, the word burlesque was used to describe musical works in which serious and comic elements were juxtaposed or combined to achieve a grotesque effect. 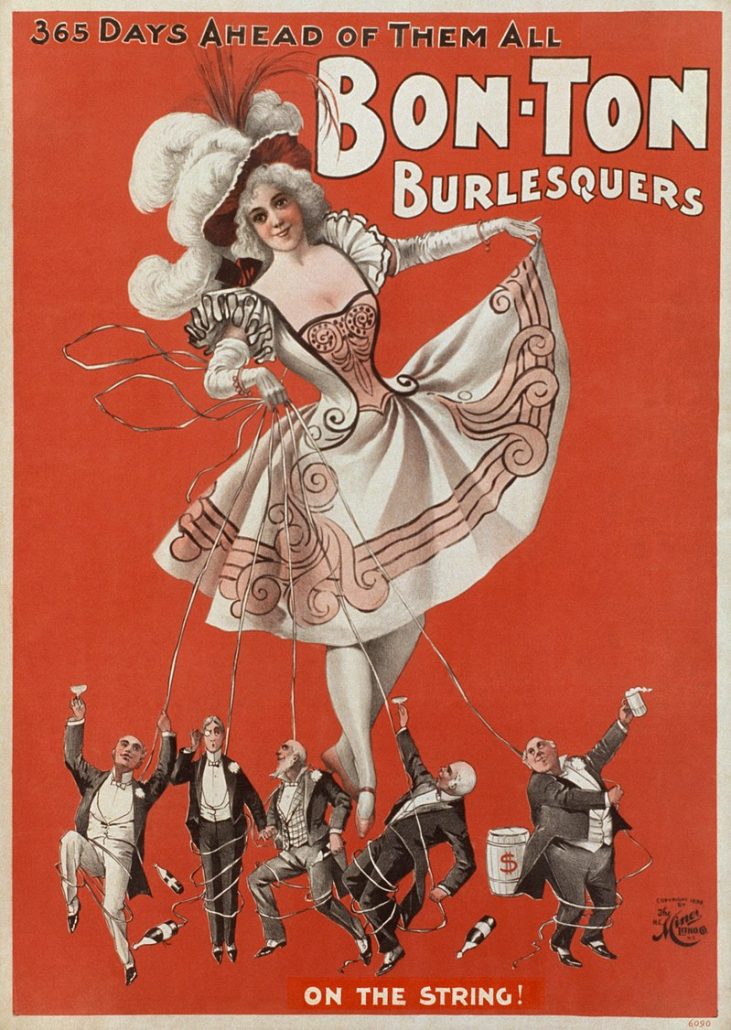 Around 1830 Victorian Burlesque became popular in England, at the time it was a theatrical form of entertainment – risqué and comical, that parodied famous music, ballet, opera and Shakespeare and upper-class. Often the male roles were played by actresses, and older-female roles by actors. At first, these were short numbers, and later they grew into the entire evening program. 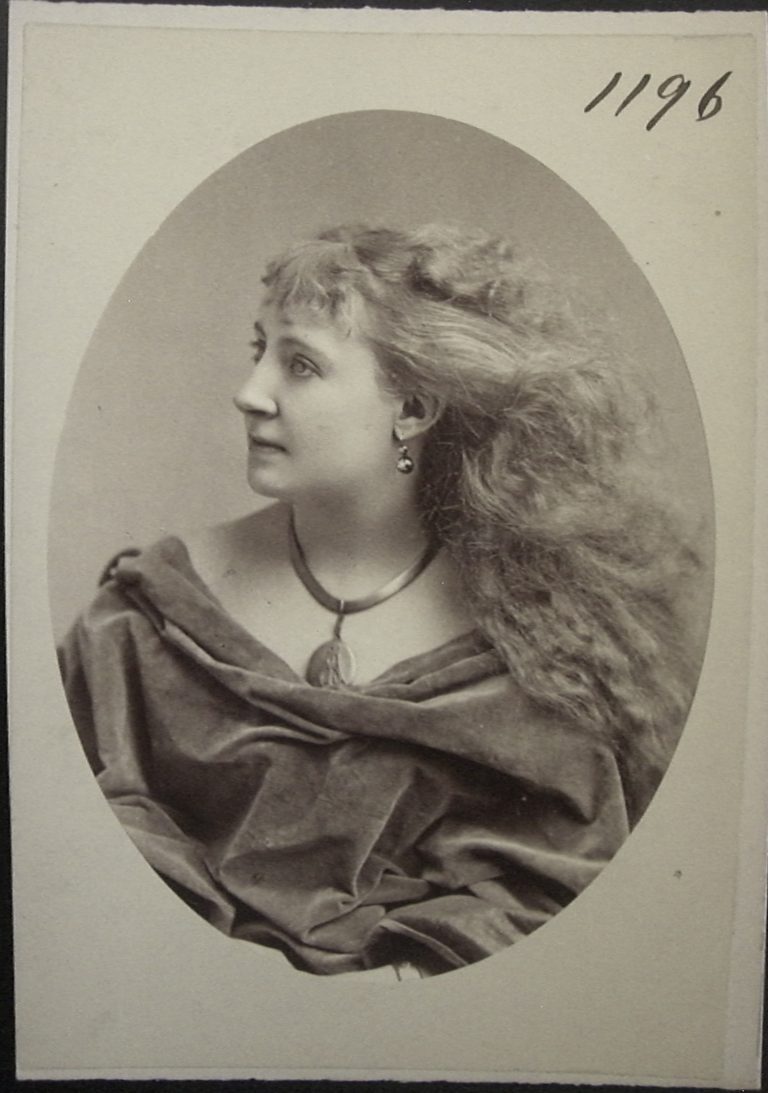 In the late 1860s, Lydia Thompson, burlesque producer and screenwriter, introduced her ‘British Blondes’ troupe in New York with the burlesque show ‘Ixion’. During this show lots of legs were on show, although covered by tights. Ladies were playing the masculine roles and wearing masculine underwear – in that time it was a very provocative show and had wit, parody, song, dance, cross dressing, risqué jokes and underdressed good looking women (so as you can imagine for that time it caused quite the stir).

After the huge success of British Blondes, burlesque became more and more popular in America and by 1905, burlesque theatre owners formed vaudeville-style circuits of small, medium and big time theatres. Burlesque acts were cheaper than vaudevillians and circuits supplied a new show every week. Burlesque performers spent an entire forty week season touring as part of one complete troupe. It was a stable source of income, but it was not prestigious work as it was seen as something for the low and middle class. Despite this, often Vaudeville artists performed under pseudonyms in burlesque shows during dry periods.

By this time burlesque shows came in three acts:
Act 1: The ensemble entertains with songs and jokes in a formal respectful style.
Act 2: The variety performances.
Act 3: The musical burlesque. 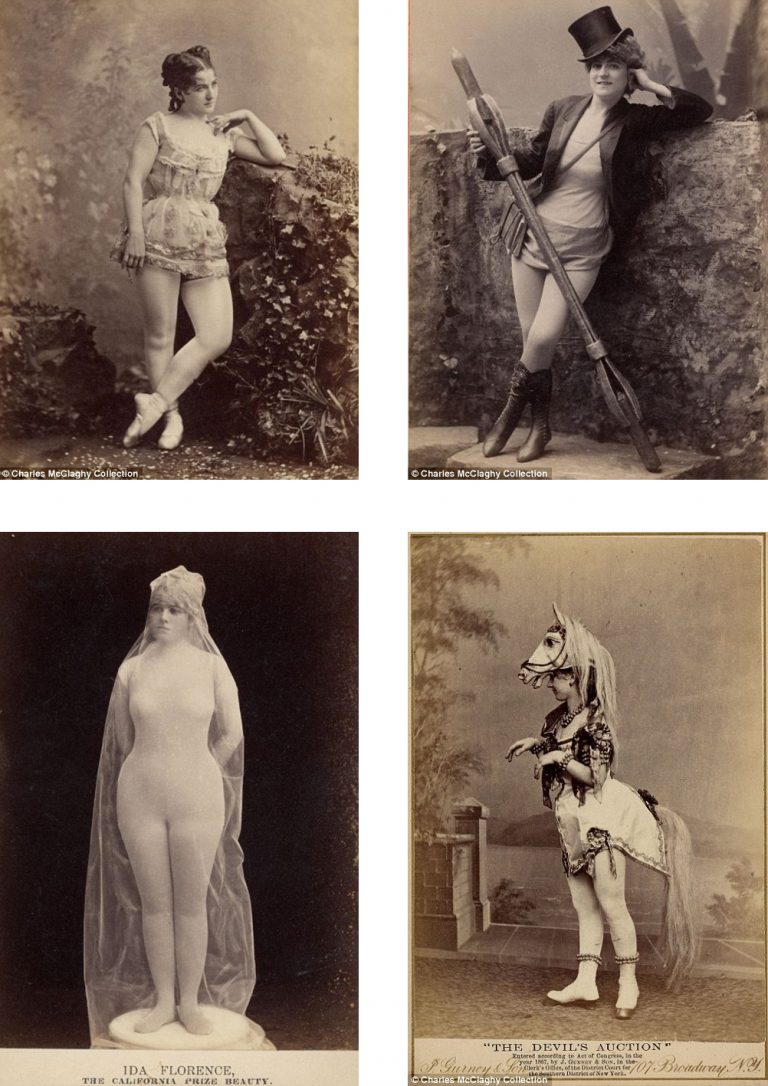 In 1907 the ‘Ziegfeld Follies’ opened on Broadway and ran until 1936 (with a break between 1931 and 1934). In 1912 ‘Minsky’s Burlesque’ started building a burlesque empire and became the most famous show business personalities in New York at the time. Burlesque circuits were growing till 1920s Prohibition and then they all shut down so the theatres were on their own (it became too expensive entertainment for that time). This caused an increase in the number of nightclubs and where burlesque moved to. 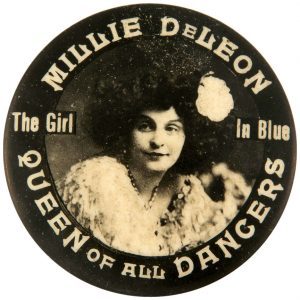 In this period Burlesque gains more strip elements with a focus on nudity. Although Strip Tease has existed since the Little Egypt artist performed ‘hootchie-coochie’ at the Chicago World’s Fair in 1893, and burlesque star Milly DeLeon ‘The Girl in Blue’ threw garters at the audience during her shows. Strip Tease became more popular because the Minsky brothers promoted it by pushing the boundaries and playing with the law.

Please note that semi-nude women on stage were by then not a new phenomenon. There were already ‘Tableau artists’ who were semi-nude living statues like art objects and the divine temple dance performed by Mata Hari which missed humour and tease. In contrast to them’ burlesque stripteases’ were a more involved entertainment format and performers had to be careful and abide by the rules without going too far as they could be jailed for corrupting public morals. In early 1930s came the dress code and performers could strip not further than their ‘strings and pasties’. In some states even tighter rules were in place such as bulkier underwear or wearing stockings all over the body without exposing the skin.

Comedy was no longer a key attraction in burlesque and Strip Tease became more artistic and increasingly graphic. Biggest stars of that time were Sally Rand with her graceful dance and Gypsy Rose Lee with her sharp sense of humour. Burlesque was a relatively safe source of titillation for married men and youngsters, burlesque clubs were places where you could get entertained and keep yourself warm for little money. Don’t forget, it was the time of Prohibition and The Great Depression so people tried to escape from reality in Burlesque nightclubs. 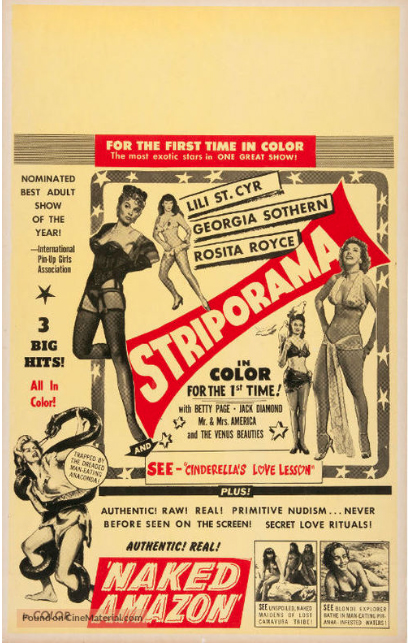 Burlesque shows become ‘bump and grind’ routines and a bit of lifeless comic bits. It lost the parody and comedy that was the soul of burlesque in the earlier years. In 1937 New York Burlesque houses closed, dismissed as purveyors of ‘filth’. The word Burlesque and Minsky are forbidden in public advertisement. This led to a new chapter in the history of burlesque – it moved from the stage to the screen, with popular films including Lady of Burlesque, Striporama, French Follies and many others. 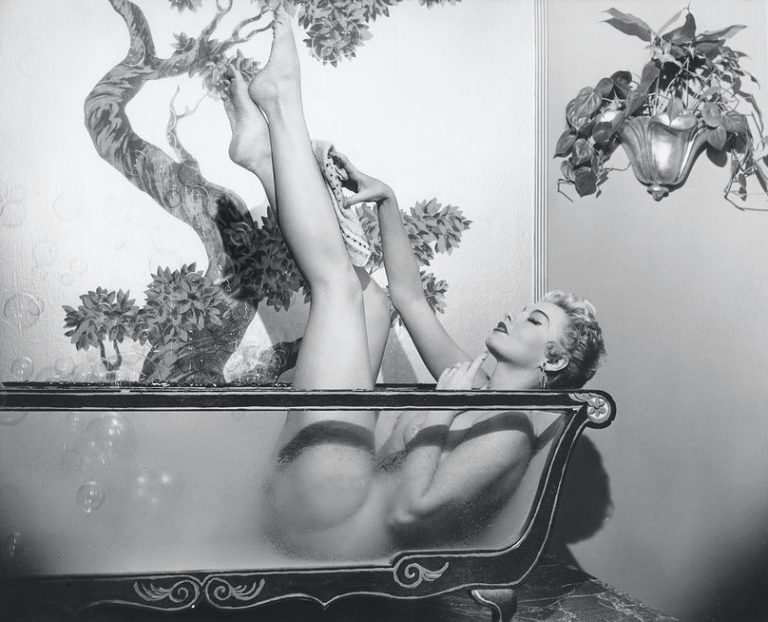 In 1955 Harold Minsky and Minsky’s Burlesque moved to Las Vegas and made burlesque accessible to an upper-middle-class crowd. Harold kept a chorus line, top-rate comedians, a snazzy band, and ‘The Star Strippers’. The Star Strippers of his show were his own discoveries like Cherrie Britton and Lily St.Cyr and other talented performers like April March, Tempest Storm (I was lucky enough to meet these two legends in 2011 at BHoF). His shows ran 6 years in Dunes and then Silver Slipper, the Thunderbird and The Aladdin. Harold was a resident of Las Vegas until his death in 1977. The last Minsky’s Burlesque show was in 1978, but this name will never be forgotten.

With the sexual revolution and overdoses of nudity in mainstream in the media Burlesque loses novelty and sees a sharp decline.

I briefly went through the history of Burlesque and it became more and more clear that this word had different meanings during different time periods. In my next blog I’ll tell you about the burlesque comeback in the 1990s, Neo burlesque and burlesque performers of the present.